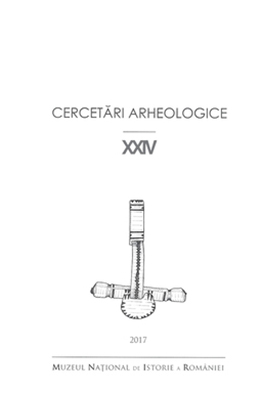 Summary/Abstract: The article approaches an unpublished set of jewelry found almost seventy years ago, on 12th of January 1949, by three peasants from Ostrov, Constanța County, into a late Roman sarcophagus. The authorities succeeded to retrieve a golden crossbow brooch, a pair of golden earrings, five golden amphora shaped beads from a necklace, 18 golden drop shaped and rhombic cassettes with inlayed garnets and green glass paste and 15 thin sheets of gold, probably fragments of damaged cassettes. Unfortunately, the sarcophagus and the rest of the items were not recovered. Most probably the sarcophagus and the rich funerary inventory belonged to a high ranked Roman officer from Legio XI Claudia which was headquartered at Durostorum (Silistra, Bulgaria, nearby Ostrov, Romania) between 2nd–6 th centuries CE. Considering the typological and stylistical analogies, we assume that the items are dating from the middle of 3rd century – beginning of 4th century CE. Some of the artifacts may have been produced in local workshops, some have been probably imported from Eastern provinces of the Roman Empire