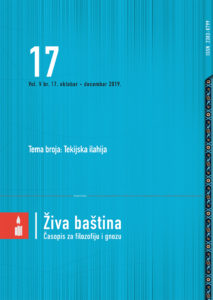 Summary/Abstract: Sacral music tradition of Bosniaks is completely realised in maqamat – music system of Oriental-Islamic cultural circle. Qur’an, salawat, dhikr, salla and adhan are recited in maqamat. Nasheed and qasida take special place in that sacral music tradition, and amongst them tekke nasheed as authentic expression of Bosniak spirituality and poetic genius. Alike adhan that is recited in Bosnian mosques, nasheeds and qasidas that are recited in our tradition are, without an exception, realised in one of the eight main maqams: Saba, Nahawand, Ajam, Bayat, Segah, Hijaz, Rast and Qurd. The very tekke nasheed is most frequently composed in Bayat, Nahawand and Hijaz maqams, with only several exceptions. The author finds that the Bosnian tradition of tekke nasheed has shaped, in music terms, the special sub-category of Bayat maqam, in this paper referred to as “Bosnayni”. The second tone on octave in “Bosnayni” maqam is equalled in tempered system of scale, in terms of tone identical to dorian mode from medieval church music system. At the same time “Bosnayni” has preserved melodic movement (sejir) of Bayat maqam which, without doubt, places this scale into the maqamat system. This paper is especially important because it „reveals“ new sub-category of Bayat maqam, and it points to influence of tekke nasheeds on contemporary nasheeds and qasidas in Bosnian language. Also, this paper is significant due to the fact that this is the first paper written in Southern-Slavic language area that deals with maqamat in tekke nasheed.