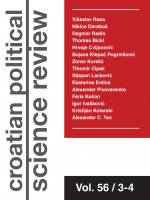 Summary/Abstract: Political correctness (PC), a contemporary phenomenon imported from the United States, has continuously been targeted as one of the key reasons for current troubles the European Union (EU) is facing. Even more, some predict that PC will be the cause of the eventual demise of Europe. This article investigates the presence of the discourse of PC in the fundamental treaties of the EU to explore whether the EU is in danger of being lost to PC. In the first part, the key traits of the discourse on PC and multiculturalism as a dominant philosophy behind it, are presented. One of the key traits of PC is linguistic engineering that may be labelled as mild or radical. In the second part, the content of the EU treaties and the Charter of Fundamental Rights of the EU are analysed comparing three different versions of the Lisbon Treaty and the Charter, namely English, German, and Croatian. The third part is focused on the analysis of the guidelines: Gender-neutral language in the European Parliament, as the most politically correct official document of the EU. The analysis showed that a change with regards to the employment of the discourse of PC came with the Lisbon Treaty and the Charter and is based on mild linguistic engineering. The change in the EU’s legal discourse arose from a cultural change that occurred in some member states. Mild linguistic engineering should not be seen as a real threat to Europe but may be interpreted as a way of reshaping the EU’s core value of non-discrimination. On the other hand, an (in)attentive slip from mild into radical linguistic engineering may ignite the flourishing of the far-right and anti-EU movements that could lead to a serious destabilization of Europe.