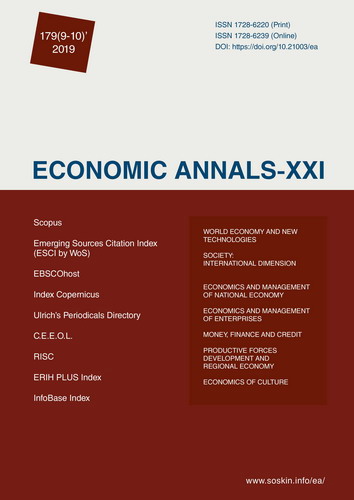 Summary/Abstract: The authors assume that alterglobalization is a process of global alternative economic, political and cultural integration, aimed at diffusion of global transnational influence, ecological-local stability and human-centeredness. To show the today prospect of alterglobal inclusive development, the authors demonstrate the connections between environmentally related taxes, percentage of the total tax revenue, real GDP per capita, and percentage of recycling in Germany, Poland, the Czech Republic, the USA and the Netherlands. Combinations of the abovementioned indicators show the extent of the presence of ecologically oriented model of development with the use of new technologies in different countries. The highest connections among the chosen indicators have been found out in Poland and the Czech Republic which determines strong prospect for the successful implementation of the inclusive circular businesses in the countries. The situation in the Netherlands is somewhat different from the one in other countries due to the size of real GDP per capita and a higher level of corporate and state contribution in the development of the circular strategy. It is argued that economic globalization causes delocalisation and disability of local communities and economies. Meanwhile, alterglobalization involves the benefits from the uniqueness, diversity and comprehensiveness of its participants. The alterglobal imperatives of the development of «network society» have been singled out. The authors stress that alterglobalism does not contradict globalization in general, but it offers other, more human-centered projects of globalization with lesser impact from the side of multinational corporations and central governments. It has been concluded that economic growth of both the national and global economies needs new momentum (plan «B») that is acceptable to most of the participating countries in the face of global competition and numerous signs of the metaphoric «sea star wasting syndrome». In spite of the absence of a single centre for global decision-making, there is a danger that the future political regime of governance may be rather authoritarian than democratic, and decisions on global problems will be taken by a limited number of subjects of international relations. Under such economic and political threats, inclusivity and circular economy are seen as processes capable of delivering benefits to humanity without harming the environment and the human being.