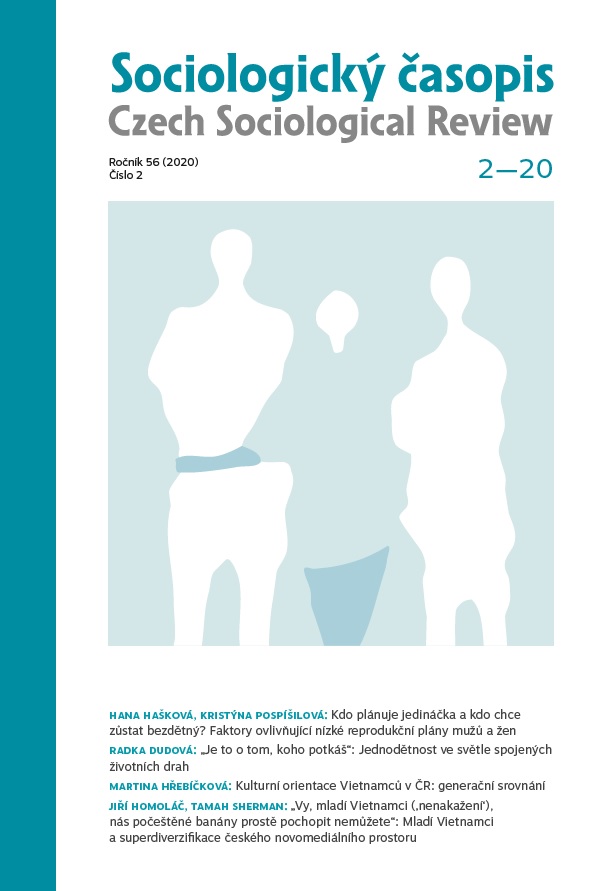 Summary/Abstract: This article analyses media texts written in Czech by young Vietnamese from 2008 to 2017. It aims to: a) describe how the authors categorise themselves and determine whether they construct their identity as hybrid; and b) consider whether these texts contribute to the superdiversification of the Czech space. Three identity versions appear in the material: banana children, young ‘uninfected’ Vietnamese, and the younger generation of banana children (BC, YUV, and YG). BC emphasise the hybrid character of their identity, i.e. the necessity of using two languages and behaving in accordance with the norms of two ethnic societies in their everyday lives. YUV declare that competence in Czech and knowledge of the social norms of the majority cannot change the fact that they are Vietnamese. YG assign basically the same features to their own category as to BC. But unlike them, YG usually consider the hybrid character of their identity to be self-evident. That the analysed texts problematise the role of language as a defining feature of ethnic identity can be considered an expression of the superdiversification of the Czech media and new media space. BC defend their right to not belong to a single ethnic society, YUV declare their identity to be exclusively Vietnamese, and MG express amazement that the existence of young Czech-speaking Vietnamese is still surprising to a part of the majority population.