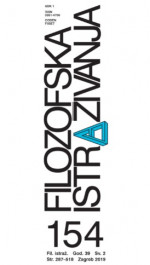 Summary/Abstract: The paper outlines the historical development of question about ambiguous and mysterious human nature, in particular considering the reasons and conditions for the founding of modern philosophical anthropology. Subsequently, it brings an overview of the conceptual beginnings and directions of anthropological research in Croatia. The focus is on the following questions: When did the investigations begin in the field of philosophical anthropology, in what kind of thinking environments were they shaped and what scientific achievements were reached? The presentation brings to light the cognition that philosophical anthropology in Croatia got its first contours and valuable contributions to the very beginning of the contemporary renewal of this discipline, shortly after its phenomenological and scientific revivals in the ventures of Scheler and Plessner. The development of this research branch is, according to Hans Lankʼs model, divided into four main conceptual orientations. The anthropology from above shows the creative contributions of Stjepan Zimmermann, Vilim Keilbach, Rajmund Kupareo, Miljenko Belić, Ante Kusić, Josip Ćurić, Hrvoje Lasić and Ivan Koprek. The anthropology from below is illustrated by the reference to the research by Vera Ehrlich-Stein, Rudi Supek, the Institute of Anthropology, Pavao Rudan and Darko Polšek. For the anthropology from culture, the philosophical achievements of Pavao Vuk-Pavlović, Vladimir Filipović, Vjekoslav Mikecin, Esad Ćimić, Nikola Skledar, Branka Brujić, Milan Galović and Mihaela Girardi-Karšulin were delineated. Under the anthropology from history, the works of Predrag Vranicki, Milan Kangrga, Vanja Sutlić, Gaja Petrović, Hotimir Burger, Mislava Kukoč and Raul Raunić are outlined. The conclusion summarises four insights. 1. Philosophical anthropology is an under-researched and not enough appreciated field, which represents one of the most fertile currents of thought in the 20th century. 2. Creative contributions are presented in all four major orientations. 3. In the context of anthropological research, lively dialogue and a fruitful meeting of different worldviews were realised. 4. The beginnings of the development of the discipline should be moved earlier in history than previously considered (Hotimir Burger), from the 1950s and 1960s to the early 1930s. The last insight points to the need for further exploration of the perceived, and so far largely neglected, continuity of anthropological themes and related ideas in the history of recent philosophy in Croatia.