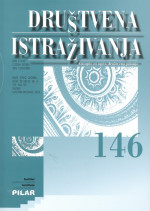 Summary/Abstract: The aim of the study was to analyse psychometric properties of the Marital /Relationship Satisfaction Scale (MRS) developed for the purpose of this research, and its association with other well-being indicators. Additionally, differences in well-being between participants who were married or in a relationship and single participants, and gender differences were tested. The sample consisted of 1087 adult internet users from Croatia. We assessed general well-being, satisfaction with specific life domains, marital/relationship satisfaction and demographic variables. MRS proved to be a reliable single factor instrument which correlated moderately with all well-being indices, but highest with satisfaction with love life and family relations. Men and women did not differ regarding MRS. Participants who were married or in a relationship showed higher levels of well-being.