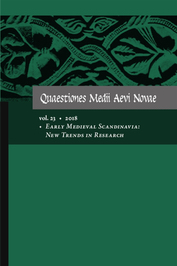 Summary/Abstract: The article contextualizes the in􏰆ow of Arabic silver coins, the so-called dirhams, to Scandinavia. The first stream began in the 810s/820s. However, at this time most Arabic coins circulated in northern Russia and on the southern shores of the Baltic Sea, above all in the emporium of Truso. In northern Russia settled small groupings of Scandinavian peripatetic craftsmen and traders who used dirhams and brought them to Gotland and Uppland. The dirham flow to Scandinavia increased apparently from the 830e onwards and culminated in the 860s/870s. Bands of mainly Upplandic and Gotlandic Vikings penetrated northern Russia participating in levying tribute and raiding. Furs and seized Slavs or other indigenous people Norse warlords and traders brought to Khazar markets where they sold them for silver. In Scandinavia itself the gifts from treasury served warlords, chieftains and kings to intensify the social ties with their retinue, helping in this way to create a symbolic capital necessary for reproduction of power. Rulers, who possessed silver, demonstrated leadership. Conse􏰂uently, the primary function of using silver was not the demand for currency but the necessity of having precious metal to regulate social and political hierarchies.