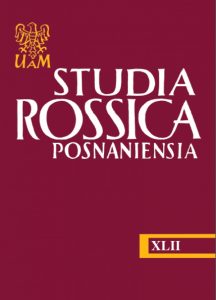 Summary/Abstract: The text presents deliberations on Russia by Louis Philippe de Segur, a French diplomat, who spent almost five years in Petersburg at the court of Catherine the Great. Against the background of his intricately crafted missionary strategy, whose aim was to sign a trade treaty with Russia, Segur draws a distinctive portrait of the tsarina and her favourite, Potiomkin, skilfully smuggling in a criticism of their reformation activities. Exposing the delusion of Russia's civilization progress, “the country of dumb obedience and anarchy” whose nation, superficially absorbing European customs, is still plunged into slavery, he simultaneously revisits “the Russian mirage”.