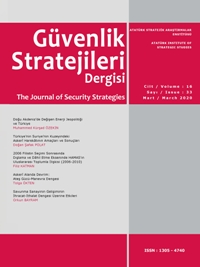 Summary/Abstract: The aim of this study is to show that Turkey’s experience in the operations of Syria in the hybrid environment is more than a lot of states’, and increased its political influence in the region as well, and thus would have a say in the process of reconstruction of Syria after the civil war. The US, for the time being, wants to create an autonomous Kurdish region in northern Syria, and despite Turkey’s all objections, it makes an alliance with PKK’s Syrian branch PYD/YPG or so called as the Syrian Democratic Forces (SDF) for fighting DAESH. The US has provided all kinds of assistance to the PYD/YPG, including arms and money. Seeing this as a threat to its survival, Turkey first conducted the Euphrates Shield Operation with the Free Syrian Army (FSA) on August 24, 2016, and then the Operation of the Olive Branch on January 20, 2018, and finally the Peace Spring Operation on October 9, 2019. The main purpose of these three operations was to clear the area from the PYD/YPG and DAESH terrorists and to contribute to the reconstruction of stability in Syria by considering the territorial integrity of the country.