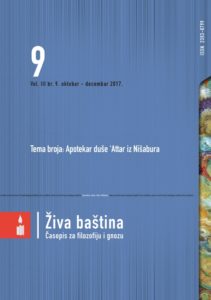 Summary/Abstract: The aim of the paper is to compare the worldview of irfan, that is, the spiritual journey as understood and described by ‘Attar of Nishapur in his three epistles: Ilāhī Nāme (Book on Deity), Manṭiqu-ṭ-Ṭayr (Speech of Birds) and Mosībat Nāme (Book of Misfortunes), who is one of the greatest arifs and authors in sufi literature, on one hand, and Ibn Sina and his three epistles: Ḥayy ibn Yaqzan (Alive, Son of Awake), Risaletu-ṭ Ṭayr (Epistle on Birds) and Salaman wa Absāl (Salaman and Absal), who is the greatest representative of peripatetic philosophy, on the other hand. In other words, the comparison of the two great scholars clearly shows differences and similarities between sufi and philosophical doctrine concerning the spiritual path. It is noteworthy that Ibn Sina’s opinions presented in this paper reflect his later stage which represents his eastern philosophy that departed from the traditional peripatetic mind.