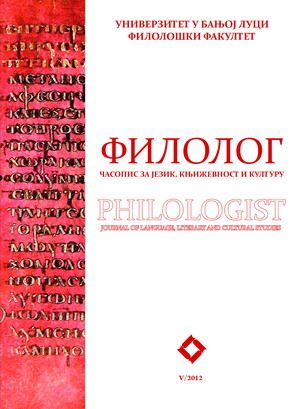 Summary/Abstract: This paper deals with the specifi c use of language within the literary subgenre of feminist dystopia. In the center of analysis lies Margaret Atwood’s distopian novel, A Handmaid’s Tale. It is inevitable to compare this novel to other classics of dystopian literature, predominantly in the context of language use and its relationship with dystopian surrounding. In particular, the feminist context of this novel is emphasized as well as the dystopian society seen from the female author’s position. Also, an important issue is her specifi c relationship to language seen as a manipulative tool as well as a refl ection of individual freedom in society where this concept is constantly susceptible to limitations. Particular focus is on the semantic and morphological analysis of concrete words, phrases and sentences where the unity of language and dystopian surrounding is fully recognizable. The result of this research indicates a specifi c occurence of dystopian language which, with its characteristics, belongs both to linguistics and literature. All this could not only motivate further research about the relationship between language and literary dystopia, but other literary genres as well.