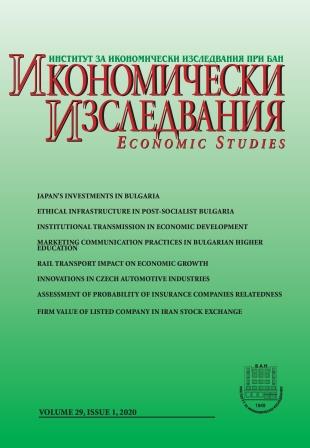 Summary/Abstract: The article analyzes the emergence and development of business ethics in Bulgaria from 1989 to the present day, that is, it traces the emergence of ethical infrastructure in the conditions of transition from a centrally planned to a market economy and its development already in the conditions of the country's membership in the EU. The period of the last 30 years is divided into three sub-periods: (a) the collapse of state socialism and the launching of a market economy and democratic principles (1989-1997); (b) the period of deeper structural reforms and the preparation of the economy for EU accession (1997-2007); (c) the years of Bulgaria's EU membership (since 2007 up to now). The research deals with main problems of building ethical infrastructure – at the beginning of the period the ownership change – restitution, privatization, etc., and later on – legislation, freedom of speech, shadow economy, corruption and more are studied. The issues discussed herein are complemented by the results of the surveys conducted in 1996 and 2019. The questions of established business ethics in Bulgaria are posed in the context of the challenges facing the society of this still transforming country.