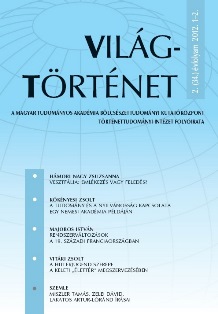 Summary/Abstract: France was a political experimental bench in the 19th and the 20th centuries, because the French tried to creat a stable political regime that would be able to avoid the political and social catastrophes, the revolutions. The first series of the attempts between 1789 and 1815 were unsuccessfuls with the collapse of the napoleonic empire at the battle of Waterloo. The second series started in 1814 and ended in 1958 with the Fifth Republic. But this study presents only the political changes in the 19th century examining five political regimes in France: the Bourbon Restoration, the July Monarchy, the Second Republic, the Second Empire of Napoleon III and the Third French Republic. The study presents the main characteristics of these regimes and tries to find the causes of the regime changes in the 19th century. And it tries to explain the fact why the Third French Republic could become so stable as political system and the longest one in the history of the French regimes in the 19th and 20th centuries.