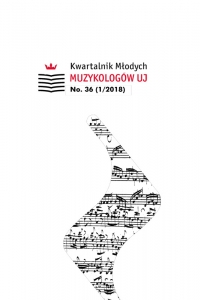 Summary/Abstract: Infant prodigies were a common phenomenon in the 19th century. They astonished the audience not only through their impressive abilities, but also the innocent beauty and the youthful grace. The perfect example of this is Apolinary Kątski (1826–1879), a violin virtuoso and a composer, known mainly as the founder of the Institute of Music in Warsaw, who, since he was three, was recognizable in concert halls all over Europe.According to the author, the early stage of the violinist’s activity requires more attention. The presented article sketches the path of young Apolinary’s life from the moment of his first performance in 1829 to May 1838, when he was granted with the famous recommendation of Niccolò Paganini. It introduced him to numerous concert halls of Europe and positively influenced his further artistic activity. The hereby presented paper makes an attempt to find out the date and place of birth of Kątski in the context of the rich musical activity of his family members. It also shows the first artistic tours of the young virtuoso against the background of his artistically talented siblings: a violinist Karol, pianists Stanisław and Antoni, and a singer Eugenia. The crucial moment are reflections on the stay of the family in Paris and their first performances in the musical centre of Europe as well as contacts of the young violinist with Niccolò Paganini.The studies on the correspondence of the father of the virtuoso, Grzegorz Kątski, and research on the foreign newspapers let the author reconstruct the life of Apolinary Kątski in the very first stage of his musical activity and place him in the context of infant prodigies of the 18th and 19th centuries.