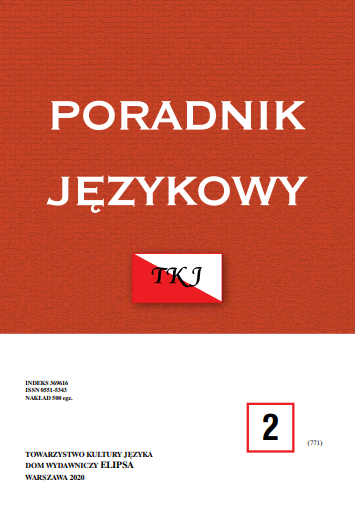 Summary/Abstract: CONDOLENCE, as an act of courtesy, belongs to acts of speech which might give rise to face threatening acts (FTA) and the resulting conflicts. On the one hand, the face of the mourner, who must find his or her way in the new extremely difficult situation, is threatened; on the other hand, the face of the speaker, whose task is to react properly to the fact of someone’s death, is threatened. What is helpful in avoiding conflicts is politeness strategies used by both senders and recipients. They constitute the research material excerpted from Polish and German obituaries and entries in books of condolence. The author of this paper has proved that both parties signalize there both positive politeness, which arises from the need of appreciation and support, and negative politeness, which is connected with the need of unlimited autonomy of acting. The nature of the performed analysis is pragmalinguistic and is based on the politeness theory of P. Brown and S.C. Levinson [1987], the focus of which is the concept of face understood as an image or representation.