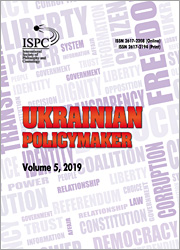 Summary/Abstract: The present article attempts to analyze the case of Vietnam as a middle power caught in-between two potentially inimical greater states, viz. the United States of America and the People’s Republic of China, in the aftermath of the Cold War, with a view to exploring the degree to which the former would have managed to maintain its relative independence in respect of each of the contending powers while drawing benefits from the relations with either of them.Making use of the multiple sources covering the presentday relations of Vietnam with both China and the U.S., the author argues that even though Vietnam had been confronted with several critical junctures wherein it may be motivated to fully align with either of the two powers, the country’s leadership would maintain a relatively neutral position while participating in the structures of interdependence and integration involving both great powers under consideration. Several implications for Ukraine’s international political strategy are thus foreshadowed in that respect.