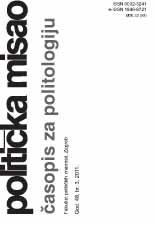 Summary/Abstract: In this article, the processes of re-stratification in Serbia during the period from the end of the 1980s until recent times are analyzed on the basis of findings of several empirical investigations. In the first part of the text, the author points out that a systemic change implies not only quantitative changes in the control and distribution of social resources, but also changes in the way of constituting the basic social groups, and the forms of their relations, which means that the groups themselves (ruling elites, middle classes, and even manual workers) in socialism and in capitalism must be defined differently. In the second part of the text, attention is drawn to the changes in three areas of the stratificational system in Serbia: mobility, economic differentiation and value orientations. In the field of social mobility, an increase of self recruitment of all basic classes is established, but also, in particular, a strengthening of barriers between manual workers and higher social strata. Furthermore, the author points out an increase in economic differentiation, and a growing importance of private property to this differentiation (the singling out of major private entrepreneurs on the top of the material status hierarchy). It is shown that, on the level of values, all classes (including the ruling class and the middle class) are characterized by inconsistency, in terms of a pronounced presence of statist-distributive values, which hampers the process of consolidation of a new institutional and normative (market and pluralistic) order in Serbia.