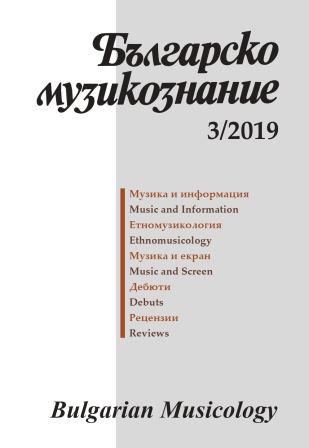 Summary/Abstract: Julian Kujumdziev’s book deals with the personality and oeuvre of composer Hristo Manolov (1900 – 1953) drawing on a vast body of historiographic sources: manuscripts and records kept in the collection of BAS; the Plovdiv Regional Archives State Agency; the Library of the Holy Synod; churches and personal archives; reviews of his works from periodicals; encyclopaedic entries and works on the history of Bulgarian composers and musical culture, etc. An overview by Nikola Yanev, Hristo Manolov’s close friend and a long-standing president of Plovdiv Association of Singers, has a special place among the above-mentioned. Julian Kujumdziev initiated and edited the publication of this previously unknown manuscript in 2014. Hristo Manolov’s creative contribution is said to be “universal”. He did not complete his studies at Dresden Hochschule fьr Musik, but his stay there in the course of several months helped him familiarise himself with the European musical tradition. He gained vast experience as an orchestra member, chorister and conductor. His compositional legacy has been presented in essays about the main genre trends in his creative development. He composed a total of 280 pieces: 12 operas and 9 operettas (some of them unfinished), many symphonic, vocal/instrumental, chamber, choral and liturgical opuses, a good part of which were intended for ensembles led by him, as well as the first Bulgarian ballet ever, i.e. Yana and the Dragon (1937). Raising the issue of “the truth” about the artistic merits of this ballet, Julian Kujumdziev traces the historical chronology of the response to the work, including that following its second staging in 1958. Hristo Manolov also composed 7 liturgies, 2 midnight masses and many other pieces of church music, all of which await an in-depth study. Hristo Manolov’s works have been grouped in genres and described according to the available information about the year and place of composition, type, volume and present location. Thus, Prof. Julian Kujumdziev’s book not only offers convincing evidence of the musician’s versatility, but also identifies possible avenues for researching and rethinking the historical role Hristo Manolov played in Bulgaria’s musical culture in the first half of the twentieth century.