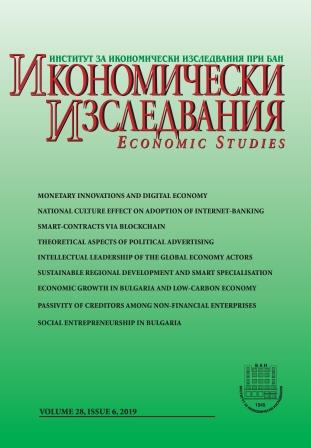 Summary/Abstract: The paper analyses the potential macroeconomic effects that the transition to a low-carbon economy would generate on investment activity and employment in the energy sector in Bulgaria. Global and European initiatives and regulations are reviewed. They trace the changes in the structure of the energy sector and may be assessed as an external shock to the country's economic growth. Using the production function approach, the relationship between real GDP, on the one hand, and capital and employees in the energy sector, on the other hand, is modelled and estimated in 1997-2017. The econometric estimate shows that a negative effect on the real GDP growth rate would be expected due to the contraction of the energy sector. Such effects may stem from the reduction of investments because of a decrease in production and profits in the sector, while employment levels have no significant impact on gross value added. This puts much more emphasis on conducting government policies on maintaining the technological level of the sector than on the negative social consequences of increasing unemployment in the energy sector.