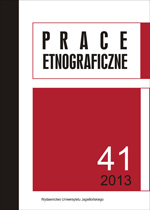 Summary/Abstract: The main aim of the text is to discuss a conception of conspiracy theory as narration which draw a parallel with gossip and urban legend as far as its features and functions are concerned. The author chooses the example of the false flag operation which concerns September 11 attacks and describes it as a unique category of myth which legitimizes actions taken by – for instance – the ruling class. The author builds her conceptual frame on the Malinowski’s theory of myth and its function – she tries to prove that it can be still valid in contemporary anthropology.