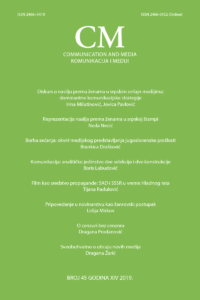 Summary/Abstract: This research aims to identify dominant communication strategies which are being used by the media to shape the topic of violence against women in Serbia. The media discourse on violence against women is the subject of this investigation, and it is located within: (1) media articles published in online editions of daily newspapers, (2) supplementary media text such as readers’ comments on online news-portals and (3) post and comments on the Twitter social network (tweets). The first part of the research systematizes the main characteristics of media reporting on violence against women in Serbia that was present within last five years, which is accompanied by a review of relevant literature. The second part of the article presents the empirical findings on the conducted research which is based on an adequate sample which covers the first two months of the year 2019. The research hypothesis – which states that there is a difference between the discourse concepts utilized by traditional and social media when it comes to the subject of violence against women, as social media content is created outside of the classical editorial bounds – was tested using the discourse analysis and content analysis methods. The research specifically concentrates on verbal violence, and in that sense the research exemplifies how the recent phenomenon of open social network communication, which promotes the freedom of speech, produces the kind of communication that correlates with the misogynistic discourse that is embedded within a particular society. The following communication strategies were identified: the promotion and legitimization of misogyny as a form of public discourse; astroturfing; condemnation of misogyny as a form of public discourse; Ad hominem, and the political instrumentalization of the topic of violence against women.