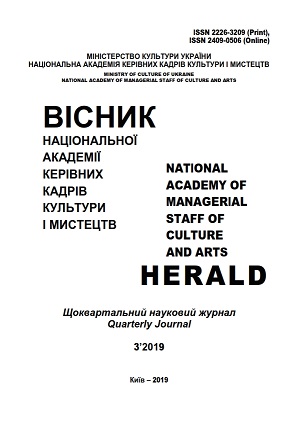 Summary/Abstract: Purpose of Article To characterize the main features and peculiarities of the icons as one of the main elements of the Ukrainian interior. The methodological basis of the research is a comparative-historical approach for determining the degree of influence of state-building processes on the formation of cultural-historical, artistic and aesthetic laws of the formation and development of the Ukrainian interior and the concrete-inductive method that determines the philosophical perception of icons and the forms of its interpretation. The scientific novelty consists in identifying certain features of the influence of the icon on the formation of a modern Ukrainian interior as one of the main aesthetic and cultural elements of the design of a home, a workplace, etc., which, in their unity, are called to create and organize a holistic, harmonious, comfortable, animated compositional space. Conclusions. The research reveals the role of the icon as one of the main traditional elements of the Ukrainian interior as the only spiritual and sacred phenomenon in the cultural and religious life of the Ukrainian people. The icon in the Ukrainian interior is part of an indivisible whole, which determines the interaction of the human world and the world of images, destroys the distance between them. The icon in the interior in a certain way abolishes a clear line between the real and transcendental worlds, forms the space in which the person is, influencing his imagination. Consequently, during the perception of the icon in the Ukrainian interior, a dense communicative connection is established in a home or a workplace: a person (believer or not) - a work of art - a prototype.