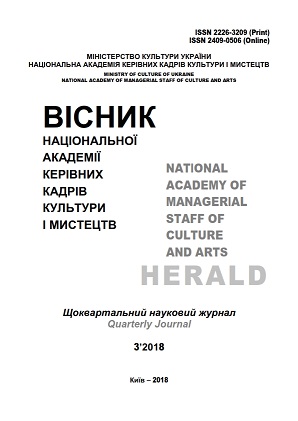 Summary/Abstract: The purpose of the article is to find out the socio-cultural conditions for the formation and gradual transformation of the content of the concept of "guest." The methodology of the study is based on an interdisciplinary combination of methods, principles, and approaches, integrated both with a general scientific methodological basis (analysis, synthesis, scientific certainty, and sub.) And with some liberal arts. Thus, linguistic methods were used to determine the etymological origin of the concepts "hospitality," "guest"; systemic - cultural and historical genesis and content of hospitality, anthropological - connection of the concept of "guest" with the social life of man. As a conceptual and theoretical basis for solving the purpose of the research, a culturological approach was used. Scientific Novelty. For the first time in Ukrainian cultural studies, the main directions for the study of the concept of "guest" are determined, in particular, by clarifying its origin and its connection with the socio-cultural aspects of human existence. Conclusions. In the process of socio-cultural transformations, the concept and status of the guest have changed. Now, this status guarantees personal safety and security of a person's property. The guest remains the main consumer, around which the whole modern system of service in the hospitality industry is built. At the same time, no matter how historically the concept of "guest" evolved - from its interpretation as "alien," "other" to the desired, desired - the original meaning remains in it. After all, in any case, the guest comes to someone else's territory, and therefore the opposite of his-stranger retains its main signs. Although it changes its poles, because it's foreign, the owner of the region, the representative of the country of visit, already becomes another, etc. Therefore, even in modern society, the main archaic structural and semantic aspects, in particular in the mutual relations of the guest and the host, retain their stability, and their basis is communication, which unfolds in a specifically symbolic time-space.