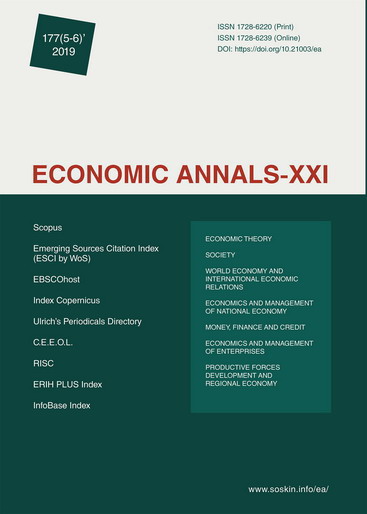 Summary/Abstract: Introduction. The «value» category belongs to fundamental categories, it is basic in the economy. As opposed to the well-known labour theory of value, marginalist theory of value (marginal utility theory) and value theories of neo-classic approach, this paper studies value from its energy-information nature’s (its genesis) point of view. Building on theoretical physics and philosophy conceptions regarding «energy» and «information» categories and energy-information duality, the energy-information nature of value has been studied in this research, appropriate features of value have been revealed, as well as its performance (movement) in modern economy (in finance, more precisely, which are the economic domain, where exchange value operates), the nature of financial risks and financial crises. Methods. The main principle, placed in the foundation of study of value concept within economic relations, laws of its movement in economy, role of finances in realization of value (money value and money capital, and further - price) is the following: financial and economic science, in general, must not be based on statements, created by economic science only, but additionally, on fundamental philosophic achievements and other results and achievements by sciences, which are relevant to finance, theoretical physics first of all. Purpose: to study energy-information nature (genesis) of value, and reveal value’s features and laws of its movement in economy from that foundation, which grants a deeper understanding of nature of financial risks and financial crises, as well as sources of value enlargement and economic growth. Results. It was substantiated that value is a type of, let us define this as «central» energy. Value is the economy’s internal energy, which is necessary for its development. Operating in unbreakable value-information interconnection, which is an analogue of energy-information interrelation in the economy, value intertwines all economic relations, shapes relevant value-chains, connects them into a single economy. Energy-information nature (genesis) of value emerges in the following: firstly, consumer and exchange forms of value form and exist as a result of processes, which are possible due to unbreakable connection of energy and information; secondly, information is a carrier of energy as economic resource; it has consumer and exchange values, which are reflected on products, which are produced with this information’s participation; thirdly, on the surface of economic relations, consumer and exchange values are revealed in appropriate information, due to information exchange. Finance is the domain where money (exchange) value and money capital are functioning. The following three features of value were analysed: (1) value operates within value-information interconnection system only; (2) value does not appear from emptiness nor disappear, but transforms from one state to another, intertwining processes, events and things in the economy; (3) value’s quantity is relative. These features of value concern the following: (a) its operation mechanism; (b) its sources; (c) system of coordinates and reference systems that employ value, and quantity of value is defined according to them. Conclusion. Certain statements regarding energy, formulated by theoretical physics, transform logically into value’s characteristics, which are well-known to economic science and practice. This has significant practical meaning, as provides a possibility to reveal the energy-information nature of value. Consequently, there is the possibility to reveal value’s peculiarities and laws of its movement in the economy, which provides us with a unique opportunity to deepen the knowledge of financial risks’ nature and financial crises’ nature, sources of value enlargement and economic growth, on this particular foundation.