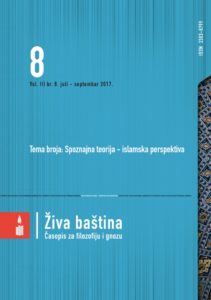 Summary/Abstract: The book about the annihilation in the contemplating (Kitab ul-fena fi’l mušahedah) is one of Ibn Arabi’s shorter epistles. At first, it could be said that one of its main themes is the issue of fena’ – annihilation in God the Magnificent, i.e. more precisely, annihilation in the Divine manifestation, but the second important feature of this work is also the fact that it exhibits some of the theories of knowledge of Ibn Arabi’s metaphysic, by putting them primarily in correlation with the theories of knowledge of rationalists and scholars, who are absorbed only with the overt meaning of religion.