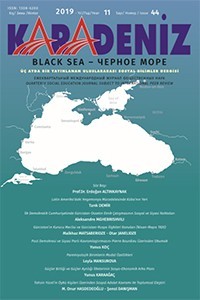 Summary/Abstract: There is an ongoing debate in the scientific world about the origin of the Trojan civilization. The prevailing view amongst historians and archaeologists about the origin of this civilisation is that the Trojans were Greek, but there is still no definitive evidence regarding this argument. In contrast, it is also suggested that the origins of the Trojans may be traced to one of the Anatolian tribes discussed in this paper. The aim of this research is, therefore, to examine the range of relationships between civilisations to identify the nationality of Trojans in the context of interactions amongst ancient communities during the Late Bronze Age, as explored through secondary sources. Under the light of this study, evaluation of this argument will concentrate on how that intercultural communication can be an important function in understanding the expressions of the social dynamics of cultures with the symbols of culture and language. How Troy is depicted in cinema, and the mythological perception of Troy in literature are additional important points analysed in this paper. This information examined will help us find clues concerning the origins of the Trojans, which still remains without an acceptable answer in the scientific world.