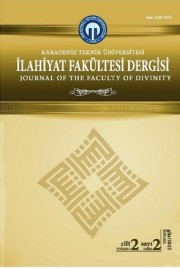 Summary/Abstract: The aim of the article is to make semantic analyses of a number of practical moral themes which takes part in Hasan Basri Çantay’s thought as an activist. In the article, beginning with brief information about Çantay’s life, works and personality, the semantic analyses of practical moral themes have been performed by considering the relationship between religion and social integration-social disorganization. In this context, it has been discussed that moral values which emphasize on social integration such as ‘(i) to be tolerant, (ii) to enjoin the good and forbid the evil, (iii) to heap coals of fire, (iv) to protect orphans’ as well as moral problems which emphasize on social disorganization such as ‘(i) discord/ to disrupt social order, (ii) to make flattery, (iii) to have sex outside of marriage, (iv) to drink alcohol etc. harmful habits’ in relation with religion. In conclusion, it has been determined that Çantay who constituted the thoughts that practical moral theme based on ethnomethodological and nomothetic approaches, (a) interested the individual and social problems of era when he lived; (b) tried to offer ‘social ethic prescriptions’ that containing practical solutions in the context of religious and moral values to the problems which are unresolved in the country during and after the war.