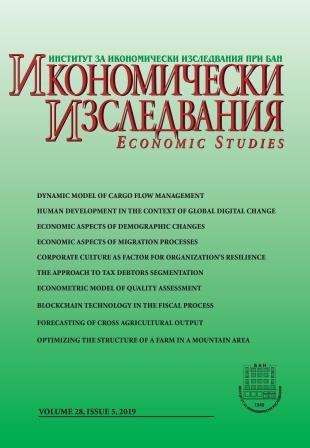 Summary/Abstract: The article considers the specifics of demographic development in Bulgaria, compared to that of the EU-28. The natural movement of the population and internal migration in the country is analyzed. The focus is on the combined influence of the three main demographic processes – fertility, mortality and migration, which are considered as the main determinants of human resource development and economic activity. To illustrate these processes, a survey was conducted and described in the village of Smilyan, Smolyan municipality. The specificity and role of two demographic processes (population aging and depopulation) in several contexts are examined – the concept of active aging in the EU and its implementation in Bulgaria, their impact on labor productivity and economic growth, the health status of the elderly as potential for work and employment, etc.