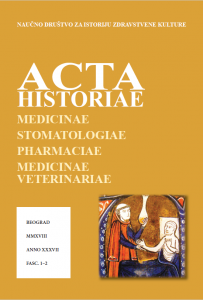 Summary/Abstract: The checked typhus epidemic broke out in Serbia in late 1914 and soon spread to most parts of the country. Faced with a shortage of doctors and medical equipment, the Serbian government turned to allied and neutral countries for help.Doctors, even entire medical missions, from various European countries, especially from the United Kingdom and France, started coming. The enormous number of victims, among soldiers and Austro-Hungarian prisoners, as well as among the civilian population, revealed the dimension of the epidemic. Th e fear that the typhus would affect other European countries, even the United States, started to settle in. In March 1915, in order to prevent the spread of the disease across the borders of the Kingdom of Serbia, among other things, the American Red Cross and the Rockefeller Foundation, with the help of Serbs who lived in America, set up a special medical commission led by Dr Richard Strong, a well-known epidemiologist. Th e mission arrived to Serbia in early April and successfully coordinated the fight against typhus in cooperation with already present missions. In that sense, Strong was one of the most credited doctors in eradicating the disease. According to the estimates at the time, typhus took around 150,000 lives.