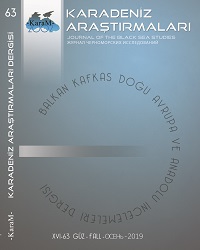 Summary/Abstract: The fact that energy has been an important area of the international system in recent years is directly related to its ability to affect the stability of the national economies. It is a fact that the problems to be experienced in the economy carry a serious risk to both national security and social welfare. As a result of these characteristics, the energy issue has been one of the reasons of the tensions between the European Union and Russia since the beginning of 2000s. Especially the natural gas-based crises between Russia and Ukraine directly affected the European countries and brought the issue of energy security back to the agenda. These developments in the Black Sea are closely related to Turkey. In the process of Russia-Ukraine natural gas crises in 2006 and 2009, Turkey built energy diplomacy on the fact that Ukraine could not provide enough energy security and that it could be the best alternative to this situation. This study aims how Turkey played a role on these tensions between Russia and the EU.