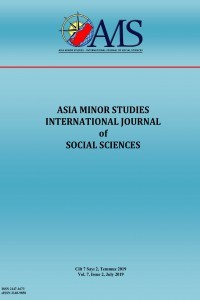 Summary/Abstract: In the years when the Ottoman Empire left behind the rise and followed the developments around it, it is not very bright and the problems are increasing. As in every society, the turmoil caused an increase in the rate of crime in the Ottoman society, and many of the problems encountered in daily life were related to security weaknesses. The bandit publicly started to usurp the money and valuables of the people living in the countryside, and unjustified intervention on the trowel and land had increased. The cases of theft increased in the same way, depending on the conditions of the people began to be indispensable or arbitrary robberies. Even if the stolen state and the animals stolen from valuable goods and goods threatened them with deterrent penalties, the crime rate did not decrease significantly, but the books of grievances were getting worse every day. Criminals, rowing, exile and fine was not enough to intimidate. Nevertheless, the state has always maintained its justice system and has not tolerated the injustice that has tried to implement it in every field. He has always attached great importance to being with the right and compensating the loss of the people who have been wronged. Decisions to repay the stolen goods, to pay the diet in case of any murder, to prevent the intervention in the land and property are proof of this.