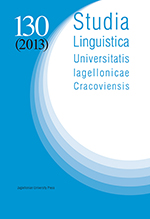 Summary/Abstract: The paper examines the different ways in which English linguistic material is borrowed and adapted by two varieties of Polish, Standard Polish spoken in Poland and American Polish used by the Polish diaspora in the US. The aim of the study is to compare the factors that determine the type and range of loans in both varieties of Polish. The comparison of the ways in which Standard and American Polishes are influenced and shaped by English embraces three main areas: 1) types of loans as products of the borrowing process (such as loanwords, semantic loans, loan translations, syntactic calques, etc.), 2) adaptation of loanwords with reference to phonological, graphic, morphological and semantic adaptation, and 3) semantic fields that are most heavily affected by the borrowing process. The findings of the analysis help to identify the reasons for the discrepancies in the treatment of the English language material in the two varieties of Polish.