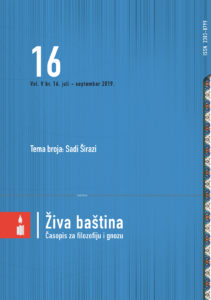 Summary/Abstract: Extensive research has been conducted in the West about Sa‘di Shirazi. The research of the influence of Sa‘di Shirazi on Francois Marie Arouet Voltaire is particularly important. Voltaire ranks among the most significant intellectuals of Enlightenment and is considered to be one of the most ardent advocates of tolerance and spirit of understanding among people. His humanism and advocating for man are especially prominent in his works Zadig and An Essay on Universal History, the Manners and Spirit of Nations. Voltaire became acquainted with Sa‘di through protestant missionaries and travel writers who translated Sa‘di’s works and praised him for his ideas of tolerance and humanistic views. During the 18 century, European intellectuals searched for new sources of inspiration in the East in order to find bases and new ideas for their enlightening and humanistic projects and to improve political and religious situation in their societies. Through other non-European cultures, French enlighteners tried to criticize weaknesses and self-love of the members of their own nations and educated classes of society. With regard to Voltaire, Sa‘di’s influence on him is evident both in the works in which Voltaire explicitly discusses Sa‘di’s influence on him, and in other works in which that influence is indirect. Not only did Sa‘di’s metaphors and satires penetrate Voltaire’s works, but also Sa‘di’s ethical, religious, political and humanistic views. The paper will present the extent to which Sa‘di Shirazi influenced Voltaire and his political, ethical, religious and social views and how Sa‘di’s ideas and worldview inspired the movement of Enlightenment and humanism in Europe.