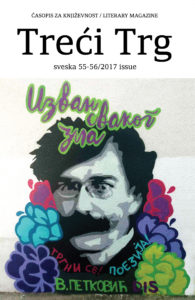 Summary/Abstract: Aurélia Lassaque (b. 1983) is bilingual poet in French and Occitan. Interested in the interaction between various forms of art, she often cooperates with visual artists, directors, dancers and particularly musicians. She has performed all over the world, e.g. in Europe, Latin America, North Africa, Scandinavian countries, Indonesia and India. She is an active advocate of linguistic diversity, acts as literary advisor for the “Paroles Indigo” festival in Arles and the “Premio Ostana Scritture in Lingua Madre” (Italy). Aurélia Lassaque’s poetry collection Pour que chantent les salamandres (Editions Bruno Doucey, 2013) has been published in Hebrew, Dutch, Norwegian and English.