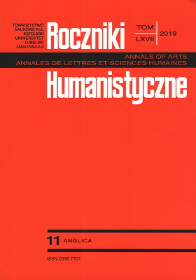 Summary/Abstract: In the article, I analyze Rikki Ducornet’s The Jade Cabinet and argue in favor of it being a novel of aerial imagination and airy imagery. To this end, I highlight the main character’s, Etheria’s, status as the book’s uncontained element and contrast imagination and logic, closed and open spaces, gravity and surreality, elaborating thus on Etheria’s impossible marriage of polarities and showing how various attributes of air correspond to people’s traits of character. Subsequently, I introduce the concept of aerial imagination, and investigate the transient nature of magic and illusions. As I proceed to explore the strange affinity existing between air and light on the one side and language and memory on the other, I endeavor to show that in The Jade Cabinet air is seen as the universal carrier of voice and as such it is equated with the divine language, which grants enlightenment and has creative powers. Finally, drawing on such airy qualities as ubiquity, restlessness, and changeability, I argue that in the novel, human memory is equated with a magical act of ongoing reconstruction, essential for the translation of perceptions into words, but also responsible for the subjectivity, and hence the volatility, that is the lack of fixedness, of the narrative itself.