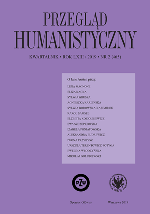 Summary/Abstract: Contemporary (Re)interpretation of Jane Austen’s Novels – about Looking for Freedom is a comparative study of the works of the author of Sense and Sensibility and the British series Taboo. As the main aim of paper the author took the search for analogies in these, far and totally different, as it may seems, texts of culture. Naming after Carrie Vaughn the works of Miss Austen as the “universe mirrors”, the author drew the attention to the modern “reflections” of Austen’s characters (anti-heroes, look-alikes) and today’s reinterpretation of the 19th century. For the palimpsest reading of the Austen’s novel she used the tools of the feminist criticism and the postcolonial theory. It allowed her to observe the femininemasculine relations, the relations based on a master-servant pattern, and, at the end, to analyse the political, social, cultural image of the coloniser and the colonised, which has been made by the colonial regime at that time. The author of the article put these two discourses together in order to prove that the rights of the 19th century wife were limited to those of a slave from the Dark Continent.