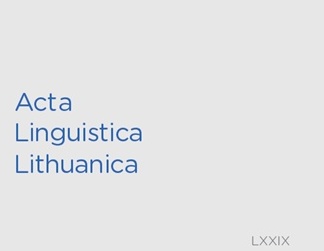 Summary/Abstract: Samogitians are viewed differently: as stubborn, silent, sluggish, even impolite… But there is nothing that can better show a person’s character than his/her language. Not only what a person says about him/herself and others but also how he/she says it. Not only from the perspective of politeness but also wording. The speaker may sometimes not even feel the exceptionality of his/her utterance. It is a bit easier to recognise it when it is frozen in writing. A number of gems of spoken Samogitian can be found in the Kretinga Dialect Dictionary by Juozas Aleksandravičius. Based on the data provided by this dictionary, the article attempts to show how the Samogitian attitude towards themselves and others, various stages of life, the surrounding environment and the possibility to be alone and to be together with others by trying to get along and to agree unfolds itself while speaking.