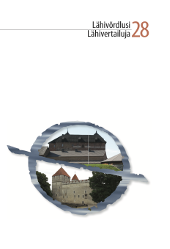 Summary/Abstract: In his grammars of Estonian (1843 and 1853), Eduard Ahrens (1803–1863), the pastor of Kuusalu, created a new orthography for the Estonian language. Ahrens intended to more adequately render the structure of short and long syllables in Estonian. Finnish orthography served as a model for Ahrens, thanks to the many similarities between the phonetic and morphophonemic (grade alternation) systems of both languages. Te most important difference between the phonetic systems of Finnish and Estonian is in the prosody of Estonian: it is possible to pronounce long stressed syllables with two distinctive syllable quantities (traditionally called the second and the third degree of quantity) without any change in the segmental structure of the syllable. This extra prosodic means of Estonian was not rendered in the orthography proposal made by Ahrens, because he concentrated on the segmental structure of syllables. This was a prescient decision, as it provided the new orthography with stability, and due to it this orthography has served the Estonian nation and the Estonian culture well since the 1870s. In the years 1840–1875 the foundations for the investigation of Estonian in accordance with the principles and theories of general linguistics were created (Fr. R. Faehlmann, Eduard Ahrens, Jakob Hurt, F. J. Wiedemann). Unfortunately, in the 1870–1880s a new theory of Estonian phonetics was formed (in 1879 Mihkel Veske created an original theory of the Estonian sound system; in 1884 Karl August Hermann used this new theory in his popular grammar of Estonian). In this theory the prosodic quantity of long syllables was interpreted as the quantity degrees of segmental sounds: both vowels and consonants were described as having three distinctive degrees of length (short, long, and overlong), and diphthongs and consonant clusters as having two distinctive degrees of length (long and overlong). Te phonetic system of Estonian was looked at as totally different from any other phonetic system. Ahrens’s orthography was reinterpreted in a way that required any sound in a stressed syllable to be determined to have one of three quantity degrees (short, long, overlong), and the diphthongs and consonant clusters to have long or overlong quantity. This view dominated in Estonian linguistics without any real opposition for about a hundred years (1880s–1980s). Te theory of three quantity degrees is totally incompatible with any phonemic theory. Despite it, up to now, the methods and rules for learning orthography are based on the false assumption that Ahrens’s orthography should be complemented with decisions about the quantity degree of any vowel or consonant or of so-called compound sound. This makes the rules for orthography schizophrenic, for in order to achieve the orthography as it is, a series of unnecessary steps must be taken. However, from the 1960s to the present day, the theory of three quantity degrees has lost ground step by step, and the views of Jakob Hurt and F. J. Wiedemann have made their way back to scientific discussion. In scientific discussion of Estonian phonetics and phonology, and in orthographic dictionaries, the theory of three quantity degrees in declarations has been abandoned, but in practice (A-B-C books, popular overviews of Estonian phonetics, the methods for teaching and learning orthography, some phonological interpretations) the treatment of Estonian as a language with a very peculiar phonological quantity system is still active.