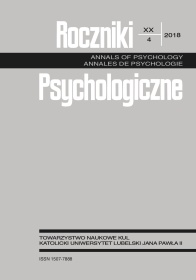 Summary/Abstract: The article presents the results of a study on the role of social participation (Reinders) in shaping the identity (Luyckx et al.) of people with mild intellectual disability in late adolescence and emerging adulthood compared to those in intellectual norm (N = 127). Three waves of measurement were carried out at semi-annual intervals, using the Dimensions of Identity Development Scale (DIDS/PL-1) and the Social Participation Questionnaire (SPQ-S). In all the waves people with intellectual disability had a higher level of the moratorium orientation, and at Wave 3 they had a higher level of the transitive orientation. Differences in the levels of identity dimensions were observed in only one wave and only in the case of exploration in depth. The type of social participation has proved to be a factor differentiating the levels of identity dimensions, especially commitment making and identification with commitment, the highest level of which was observed in people with integration and assimilation types. The study responds to the need, expressed in the literature, to focus on specific groups in identity development studies.