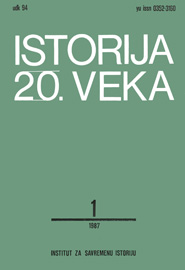 Summary/Abstract: This article stresses plurality as an essential characteristic of Spanish socialism (reformistic - the PCE; revolutionary-Marxist - the communist PCE; Marxist-anti-Stalinist - the POUM; communist leftists, Trotskyists, ect., critical of the Third International; anarchistic, anarchоcommunist, anarehosyndicalist - the CNT, FAT, El Partido Sindicalista). Right from the time of the First International there had been a conflict between the dominant anarchistic (or libertarian) trend and the social reformistic and Marxist tendency. These differences were particularly apparent in the standpoints adopted towards the October Revolution in Russia (and the founding of the Third International), and towards the dictatorship of Primo de Rivera (1923 - 1930). The creation of the Second Republic in Spain (1931- 1939) would not necessarily bring cooperation among the Left. A special analysis is made of disputes within the Workers’ Socialist Party of Spain (PSOE) (the left - caballeristas, centre - prietistas, right - besteiristas), the Communist Party and the anarchistic movement (CNT, FAI, pestanistas). The Popular Front was unable to resolved these differences either. Disunity within the Spanish socialist movement in terms of political programmes and organization became one of the basic causes of the collapse of the Second Republic and the civil war 1936 - 1939. For some, the civil war was the start of a deep, authentic social revolution (left-wing socialists, anarchists, POUM), while for others (center and right of the PSOE, PCE, republican parties) lit was only an invitation to defend the legitimacy of a bourgeois republic. The social revolution of 1936 - 1937, with radical collectivization of the economy and agriculture and introduction of self-management (libertarian communism), for which the CNT was especially working, was forcibly suppressed by the Popular Front government. The PCE played a particularly prominent role in this: it was implementing a policy in Spain designed to serve the interests of Stalin and the USSR.