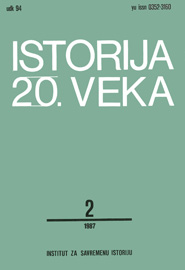 Summary/Abstract: The goal of this study is to point out how much was the press and public opinion in the United States interested for the events which took place in the spring of 1941. in Yugoslavia, actually to describe how much sensation have those events - the joining of Yugoslavia with the Tripartite Alliance and the coup d’etat of March 27. - produced in the United States. The articles and documents used in this paper enabled comparison of the American foreign policy with the mood of their public opinion. The titles in American newspapers from that time indicate the growth of interest for the political events in Yugoslavia. American pressing the meaning of a historical source has not been used to the present time in exploring these events. The newspaper articles analysed in this work provide a clear image of the American political strategy in the Balkans, together with a thorough insight in their striving to induce and support the resistance against the Nazi penetration into South-east Europe, and particularly in Yugoslavia. In the need to understand better the writing of the American press about the changes in Yugoslavia, from the moment of joining the Axis to the onset of the April war, this paper includes official Diplomatic papers issued by the U.S. Government Printing Office, considering more important events which occurred immediately before the „March revolution”. As from the beginning of the year 1941., and particularly from the middle of February, American press became more detailed in dealing with the political events in Yugoslavia. American newspapers greeted the coup d’etat of March 27. with enthusiasm, connecting it primarily to the war like and freedom spirited traditions of the Serbian people. Although there were some articles in the American newspapers in which the relations between Yugoslavia and the United States were observed from the Isolationist point of view,the greater part of newspaper material encircled in this work, testifies about a wide support of the American public opinion to the resistance of Yugoslav people against the Nazi aggression. The common attitude of the American public opinion was, in the majority of cases, identical with the official policy of the U.S. government towards Yugoslavia.