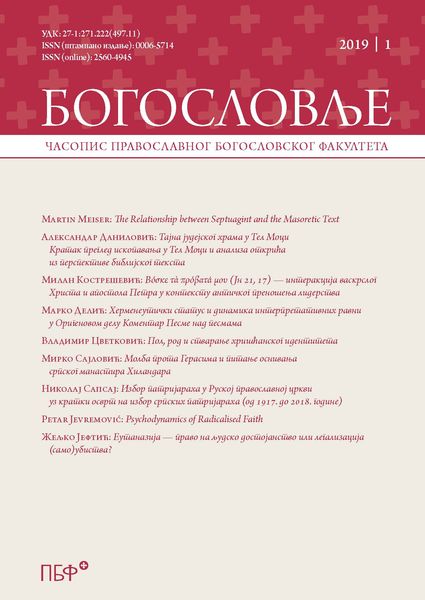 Summary/Abstract: Jesus’ interaction and dialogue with Peter in John 21, 15−17 is one of the most dynamic and powerful episodes in the New Testament that has at the same time puzzled many scholars with varied interpretive issues. With regard to Jesus’ dialogue with Peter in John 21, 15−17, scholars are divided whether Jesus’ conversation and command to Peter aims at rehabilitating Peter to discipleship after his denial of Jesus or entrusting an authoritative commission to Peter to lead others. While most scholars place their emphasis on the role of Peter in John 21, 15−17, the present paper intends to argue in the light of ancient succession stories that Jesus’ interaction and conversation with Peter aims at transferring his leadership role to Peter. Such an attempt is not designed to support Peter’s primacy rather it is intended to interact with the narrative in John 21, 15−17 and presupposes the literary unity of John 21 since the question of integrity is beyond the scope of this paper. In what follows, we will, at first, briefly explain the scholarly discussion surrounding John 21, 15−17, and then we will narrate the succession thinking in Mediterranean Antiquity based on the study of Charles H. Talbert and Perry L. Stepp. Finally, we will explicate exegetically that Jesus’ interaction with Peter in John 21, 15−17 fulfills conceptually not only the ancient conventional form of succession stories but also suggests love for Jesus as a precondition for Jesus’ transfer of leadership.