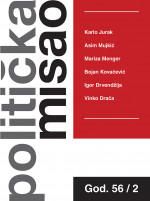 Summary/Abstract: In this paper the authors analyze the emotions of survivors of the camp system Gospić-Jadovno-Pag, where people of Serb and Jewish ethnic descent were murdered during the summer of 1941, as well as communists and other political enemies of the ustashi regime. The approach to the study of emotions is based on the eyewitness accounts published by the historian Đuro Zatezalo. The paper starts with an analysis of the emotions in history with a particular emphasis on the testimonies of survivors as a distinctive and extremely important source in the studies of the Holocaust and genocide. Afterwards, the authors examine the intentions of those who collected the testimonies, as well as memories and emotions as aspects which a historian who researches testimonies ought to have in mind. A description of the impact of race laws issued by the Independent State of Croatia is provided together with an overview of the history of the camp system Gospić-Jadovno-Pag, followed by an analysis of the emotives expressed in the testimonies, with the focus on the emotions of fear, anxiety, hope and joy. The relation between recollection and emotions is also discussed, in addition to the way in which the flow of time can alter the intensity and the contents of emotion, which can provide a valuable methodological insight to the researchers focusing on the history of genocide and oral history.