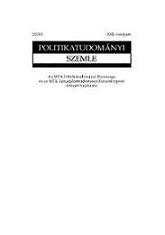 Summary/Abstract: Welfare reforms, especially pension reforms are among the most sensitive issues in the societies of Europe, including Hungary. Demographic ageing and the subsequent macro-fi nancial constraints, however, may imply diverse reactions of the political elite; the political degrees of freedom of possible policy reactions are high. This paper analyzes the political motives and mechanisms shaping pension reforms. It gives an overview of the main theses of the political science literature about welfare reforms based on the schools of institutional resistance, prospect theory, veto player and blame avoidance approaches. After a short historical presentation of the changes in the Hungarian pension system during the last two decades, we explore certain specifi c causes and mechanisms of the unusually high volatility of reform and counter-reform tendencies.