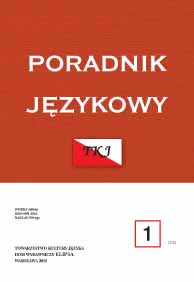 Summary/Abstract: The author recalls the views of 19th- and 20th-century researchers (from W. von Humboldt to A. Wierzbicka and R. Grzegorczykowa) that were significant for developing and shaping the concept of the view of the world (LWV), discusses LWV definitions as a set of judgments for interpreting the world, and suggests that the term LWV be apprehended through reference to the Ogden-Richards semiotic triangle, which comprises “language”, “image” and “the world”. He expresses his conviction that two research procedures may be applied to the description of LWV: semasiological, coming from a sign (a linguistic name, lexeme) towards its meaning and the signified object, and onomasiological, coming from the object towards its name. He presents the semasiological procedure for reconstructing the linguistic view of the selected object on the example of the entry gold by analysing lexicographic defi nitions, derivatives, collocations and proverbs. He formulates the certification principle for definitional features, their reliance on “linguistic evidence”. He discusses two fundamental issues as part of the onomasiological approach: philosophical, regarding the ontological status of the “real objects”, and linguistic, regarding relations between objects and their names and the necessity to decide which of the names are “absolute” synonyms denoting one object (Jutrzenka = Gwiazda Poranna (the Morning Star)), and which are merely quasi-synonyms, referring in fact to various objects (deszcz – ulewa (rain – downpour)). This paper discusses also two disputable issues: the type of data on which the author can (should) base the study of LWV (only systemic or survey and “by-linguistic”, too?) and multitude of LWVs (textual? discoursive? phraseological?); he decides that they need not be postulated since all that is comprised by LWV.