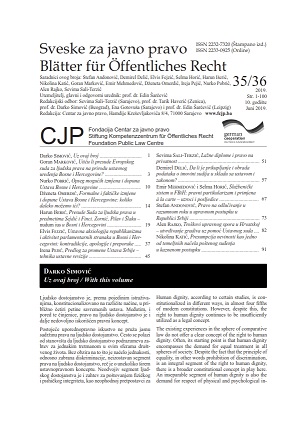 Summary/Abstract: Political axiology of Republicans has been continuously depreciated in post-Dayton political process. This process has been created and regulated by ethnocratic political representatives in accordance with their absolutist and monocratic ideology. The flawed Constitution of Bosnia and Herzegovina is an outcome of the extorted peace agreement, that allows ethnocratic elites to achieve a hegemonic position and obtain incontrovertible political power. Thus, it is almost impossible to speak about democratic or legitimate nature of the Constitution, since it has not been created, proposed and adopted in accordance with normative rules of democratic procedure. Considering that several institutional opportunities for constitutional changes – that evidently were not a priority for ethnocratic political actors - have been exhausted, non-institutional political activities and referendum democracy seem a rational choice and solution for designing, proposing and implementing constitutional changes in Bosnia and Herzegovina.