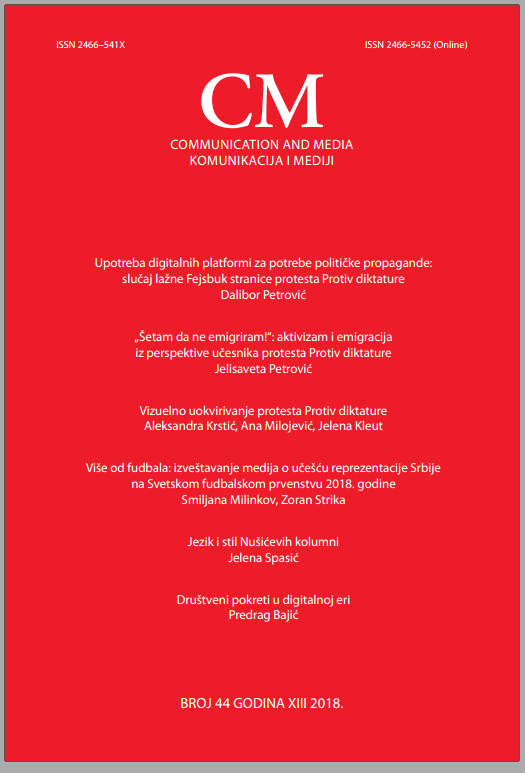 „Šetam da ne emigriram!1“: aktivizam i emigracija iz perspektive učesnika protesta Protiv diktature
„WALKING – NOT TO WALK AWAY!”: ACTIVISM AND EMIGRATION FROM THE PERSPECTIVE OF THE PROTESTORS AGAINST DICTATORSHIP

Summary/Abstract: The aim of this paper is to examine the characteristics of the relationship between political activism and plans for emigration among the participants of the protest Against dictatorship. A survey of the protest participants was conducted in three cities - Belgrade, Nis and Subotica (N = 175), during the spring of 2017. The paper starts from the “exit-voice” theoretical model, developed by economist Albert Hirschman (1970). Applied in a political context, this model links political activism and emigration plans in a way that – if there is a room for publicly expressed dissatisfaction – the propensity for emigration is lower. On the other hand, in the case of high dissatisfaction with social circumstances and the inability to influence them through available mechanisms of political participation, a number of citizens will decide to emigrate. The findings show that the participants of the protest Against dictatorship are more politically active than the overall population. They sign petitions more often, they protest, strike, contact government officials and donate money for different purposes. In other words, the Protest participants represent the core of the active citizenship in Serbia. However, they also take into consideration the possibility of leaving the country. The majority of respondents thought about this option; emigrating is particularly attractive to young people, students and the employed. Considering the importance of the active citizenship for the development of democracy, the high tendency for emigration among the Protest participants is worrisome. Although the more flexible forms of political activism (participation in protests, occupation of public spaces, strikes, etc.) – contrary to expectations – did not show statistically significant relation with emigration plans, the active engagement through political organizations distinguished itself as a factor reducing the chances of moving abroad, which partly confirms the assumptions derived from Hirschman’s theoretical model.