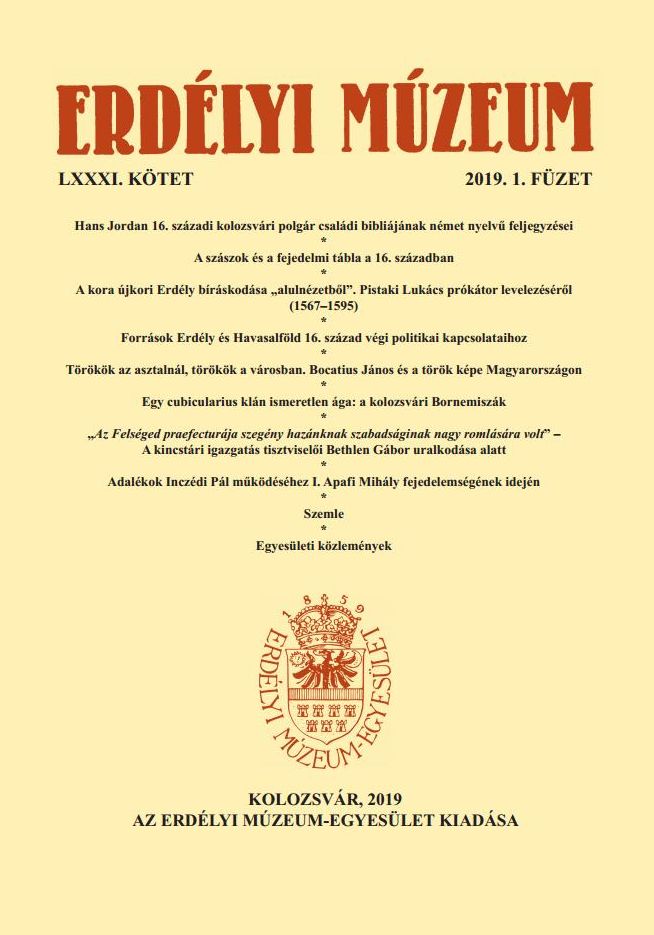 The Correspondence of the Procurator Lucas Pistaki (1567–1595)

Summary/Abstract: By analyzing the correspondence of Lucas Pistaki, an early modern Transylvanian procurator with the town magistrate of Bistrița (Beszterce, Bistritz/Nösen) between 1567 and 1595 the study brings new data on the judicial activity of Transylvania and on the professional and private life of an early modern procurator. Our archival sources are unique since they do not discuss the mentioned topics from the point of view of the authorities who operated the system, but rather from “below”, from the point of view of those who participated as litigants or as their representatives in the judicial process. More than half of the letters concern the lawsuits of Bistrița represented by Pistaki at the court sessions of the Princely Table against the nobility of the surrounding counties. The same letters contain details about the activity of the Table, the daily tasks of Pistaki at these court sessions and the charter-issuing activity of the Princely Chancellery too. Other letters discuss the activity of the judicial institutions of the counties and the trials he represented for the town at these sessions. Some missives also show that, if asked, Pistaki advised the magistrates of the town in issues regarding their judicial actions even in cases when he did not represent the town. Sporadically there are fragments regarding Pistaki’s private life and family members, or details about more general news and events from around the country that could have influenced the town’s and district’s inner life and political connections. The data of the correspondence shows that, based on his experiences gained as notary of the Princely Chancellery and as procurator, Lucas Pistaki had a deep knowledge of the whole judicial system of the country and of the characters who operated it. He had a better knowledge of the customs and laws of the country, the decisions of the Diet, or even of the privileges of the Transylvanian Saxons in general, and of the town or the District of Bistrița in particular than the members of the town-magistrate themselves.