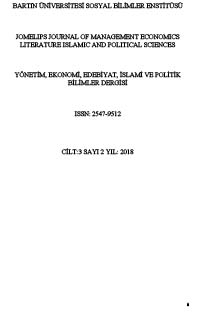 Summary/Abstract: In today's modern world where globalization has begun to gain momentum rapidly, the boundaries and obstacles between the countries in a way have become more dependent on each other economically and politically. The way to increase the competitiveness and efficiency of the countries in international markets is through the production and export of high technology products which will be accepted in international markets. In this way, the export revenues to be obtained are of vital importance for the economic growth, development and economic future of the countries. Selected OECD member countries and Turkey's high technology, including the size of the product export development and to examine its impact on economic growth in this study which was prepared utilizing the World Bank started the 1992-2016 period data data analysis method was used. According to the analysis result, the share of export products with high technology in Turkey's total exports, the tapering period in 1999-2001, except to be as occurs at lower level than 2%, 1999-2001 sub-period, the rates in question but can rise up to 4%, Turkey's exports mainly "low", “low-medium” and “medium-high" technology has been found to be based on. Turkey ranks far behind other OECD countries in this regard.